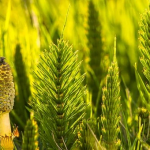 Description and Habitat:
‘Horsetail’ Latin name being (Equisetum arvense), known by the gardening fraternity as the dreaded weed ‘Mares tail’.)

Horsetail in the garden can be an invasive, deep-rooted weed with very quick growing rhizomes that can be easily recognised by its upright, fir tree-like shoots that appear in summer.  The problem with Horsetail in the garden is that its creeping rhizomes can go down as deep as 7 feet below the surface of the soil, making them difficult to remove by digging down.  The rhizomes can travel a long way, even invading the next garden and the one after that ad infinitum.

Horsetails belong to a family of plants that were widespread in the Devonian period, about 350 million years ago. In that era, the plants were abundant, and they grew to the size of trees. The horsetails of today, though considerably smaller, are sometimes referred to as living fossils.

The leaves of horsetails are arranged in whorls fused into nodal sheaths.  The stems are green and photosynthetic and are distinctive in being hollow, jointed, and ridged (with sometimes 3 but usually 6-40 ridges).  There may or may not be whorls of branches at the nodes” (Wikipedia).  Most species of horsetail grow between one and five feet tall but a species known as giant horsetail can get up to 26 feet.

Horsetails do not flower therefore do not seed.   Like ferns, they reproduce through the dispersal of spores.

A real pest to the gardener, but to the herbalist, Horsetail can be a useful addition to the Healing process, although it is necessary to ensure that the herb you think you have is the right one, especially with this herb, as there are others that may have a similar appearance yet could be poisonous.  With this in mind it's best to buy with the Latin name of Equisetum arvense, or, if looking in the wild, there is an app for mobile phones that will tell you exactly which herb you have found, and will include the Latin name as well as the folk name.

Collection and preparation:     Collect in early summer.  Cut the plants just above the ground and hang in bundles in an airy place until dry.

Indications and Therapeutics:
Horsetail is considered a specific in cases of inflammation or benign enlargement of the prostate gland.  Externally it is a vulnerary or wound healing herb.

Horsetail not only contains silica, but it is also high in many minerals that support its use as a bone-strengthening herb.  Silica is fundamentally important in building and maintaining healthy connective tissues, cartilage, muscle, skin, tendons, sheathing, and bone.   Consuming Horsetail as a natural source of silica increases the body’s absorption of bone-building minerals such as calcium, helping to provide relief from a whole host of structural diseases.

Horsetail is an excellent genito-urinary system astringent. It may be applied to such conditions as urethritis or cystitis with haematuria, reducing haemorrhage and healing wounds thanks to the high silica content. Whilst it acts as a mild diuretic, its toning and astringent action make it of value in the treatment of incontinence and bed-wetting in children. As a diuretic, it is particularly suited to metabolic or hormonal oedema during menopause. The diuretic action is thought to be due partly to the flavonoids and saponins.

Baths with Horsetail extract are indicated for functional pelvic disease in women, where there is no inflammation, but primarily muscular tensions, and changes in muscle tone. It is considered a specific remedy in cases of inflammation or benign enlargement of the prostate gland. Equisetum is restorative to damaged pulmonary tissue after pulmonary tuberculosis and other lung diseases, as the silicic acid is said to stabilise the scar tissue.

The juice of the plant is good for anaemia resulting from internal bleeding, such as stomach ulcers, since it promotes the coagulation of blood.

Externally it is a vulnerary and may also be applied as a compress to fractures and sprains. The effect of strengthening, and regenerating connective tissues has been ascribed to the silicic acid content.

The local astringent and anti-hemorrhagic effect explains the application of horsetail to such conditions as bleeding from the mouth, nose, and vagina, its use to check diarrhea, dysentery, and bleeding from the bowel, and for slow-healing wounds, chilblains and conjunctivitis.  The fresh, crushed stems may be used to alleviate nosebleeds. The juice increases blood clotting, in spite of it containing hemolytic saponins. An infusion makes a good wash for wounds, sores, skin problems, and a gargle for mouth and gum inflammations.

In some cases, Horsetail has been found to ease the pain of rheumatism, and stimulate the healing of chilblains.  Horsetail is good for splitting nails and lifeless hair. It is also useful when white spotting occurs on the nails, which is said to be a symptom indicating calcium imbalance in the body.

It has been established that the administration of silicic acid causes a temporary increase in white blood cells.  Horsetail’s silica content encourages the absorption and use of calcium by the body and also helps to guard against fatty deposits in the arteries. Its influence on lipid metabolism leads to potential benefits for cardiovascular problems.

Contraindications:
Horsetail comes with its own warning: Do not use where there is cardiac or renal dysfunction.

Preparation and dosage:
Infusion:  2 teaspoonsful of the dried plant and pour over a cup of boiling water.  Leave to infuse for 10 to 15 minutes, drink 3 times daily.

To help with rheumatic pain and chilblains, put 3 ½ ounces of the dried herb to infuse for an hour in hot water.   Add this to a bath of warm water.

Additional comments and Folklore:
Horsetail is considered to be a living fossil, it is the only living genus of the entire subclass Equisetidae, which for over one hundred million years ago was much more diverse and dominated the late Paleozoic forests.  Some Horsetail plants were large, reaching up to 98 ft. tall.

The pattern of spacing of nodes in horsetails, wherein those toward the apex of the shoot are increasingly close together, inspired John Napier to invent logarithms.

According to the Doctrine of Signatures, every herb resembles the condition or the part of the body it can heal.   Horsetail stalks bear a striking resemblance to human joints, and it is now known that they are remarkably high in silica – a substance that preserves elasticity and connective tissue.

The Ancient Greeks used horsetail in the treatment of wounds and the Romans used it as a vegetable, an animal feed, and medicine. Culpeper said it was 'very powerful to stop bleeding, either inward or outward, and eases the swelling, heat, and inflammation of the fundamental, or privy parts, in men and women.'

The Chinese use Horsetail, to cool fevers and as a remedy for eye inflammations, such as conjunctivitis, and corneal disorders, dysentery, flu, swellings, and haemorrhoids.

Recent research in Russia has apparently demonstrated that horsetail is effective in removing lead accumulations in the body. The dried stems may be used as a metal polish, hence the common name pewter-wort.

While vastly smaller than the plants that dominated the time of the dinosaurs, it’s amazing that it still exists in much the same form, except it’s quite a bit smaller.